The Golden Circle Tour will give you a first-hand introduction to the country. Driving through Iceland’s rough and fertile agricultural landscape, you will see the mountains and glaciers of the south interior of Iceland in the distance, while our knowledgeable guides tell you stories, facts and figures of Icelandic geology, history and culture, all from within the comfort of our converted Land-cruiser.
We will be making stops along the way, i.e. photo stops, viewpoints, viewing Iceland’s beautiful horses, the herds of sheep, or other natural sights along our route. Several nice lunch-spots are available along the way (lunch not included), depending on time and place.

The National Park of Thingvellir

Highlights of the tour are Þingvellir National Park, Gullfoss (The Golden Waterfalls) and the tour includes the Þingvellir National Park, the historical and geological wonder, literally “Parliament Plains” – considered in many ways the heart of Iceland, the essence of both its history and geology. Here one can view a fissure zone situated on the tectonic plate boundaries of the Mid-Atlantic Ridge, where the American and Eurasian
tectonic plates are constantly pulling apart at a rate of a few centimeters per year, making evident the rifts of the earth´s crust. 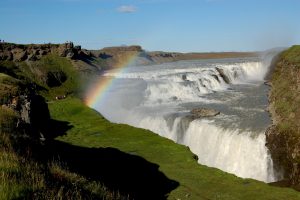 Gullfoss on a beautyful day

At the Geysir geothermal area you will witness the Strokkur geysir shooting boiling hot geothermal water about 30 meters (98 ft) up into the air every 3-10 minutes. Other geothermal steam vents in the area are equally interesting, making the whole area quite magical.

Not far from the Geysir geothermal area, almost at the very beginning of the interior Highlands of Iceland lies the Gullfoss (Golden Waterfalls), created with Glacier waters tumbling down from the Glacier Langjökull that lies in the Highlands above. The majestic Gullfoss itself is a crevice that goes about 32 m (105 ft) into the earth.
Good to know:

My Iceland Guide is a smallish, family-run business. Click here to read all about us!